New #acrylicpainting in progress. Too hot to work in the garden today but guess it was on my mind. 30”x30” #i

Creating art can be self exploration so through my what I learn is that I prefer to paint living things like people, trees and animals but I think it’s time to paint some more animals! 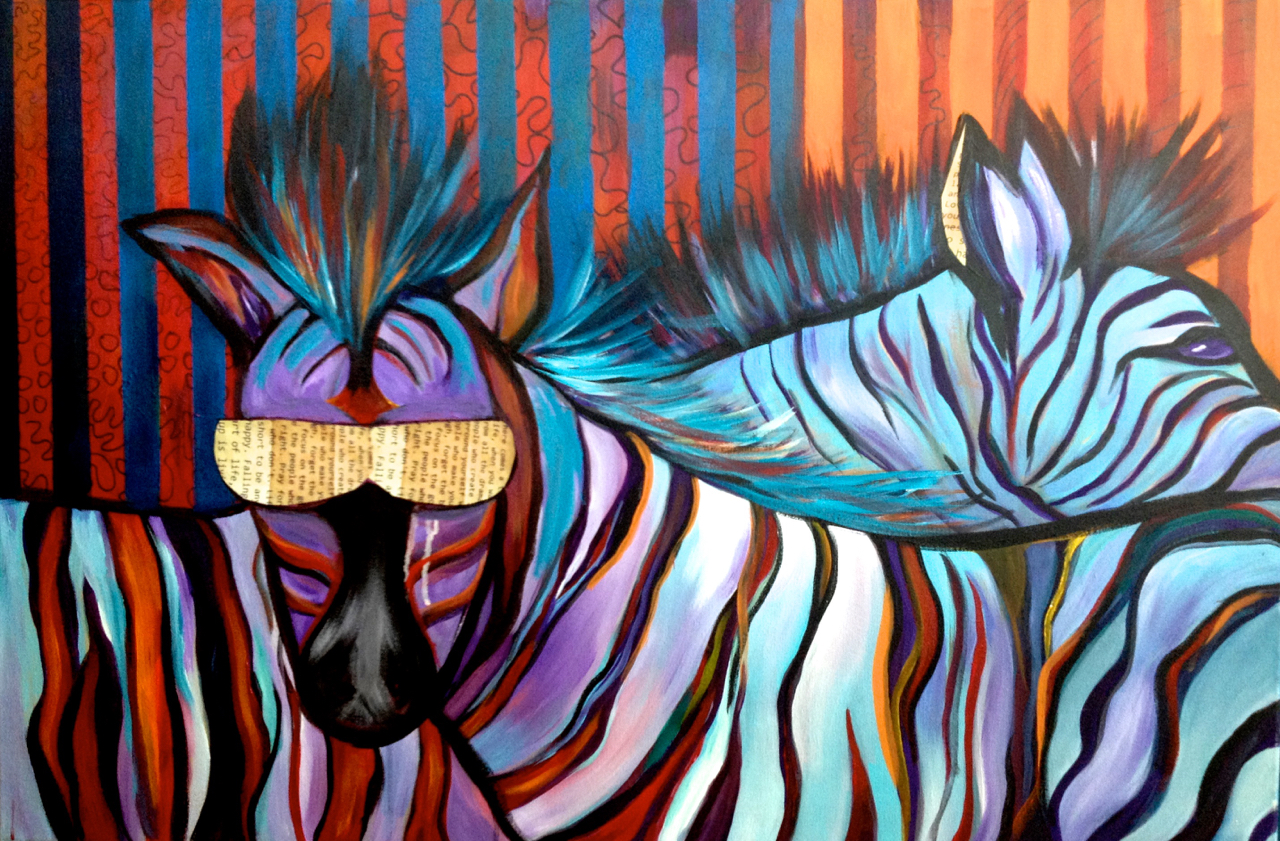 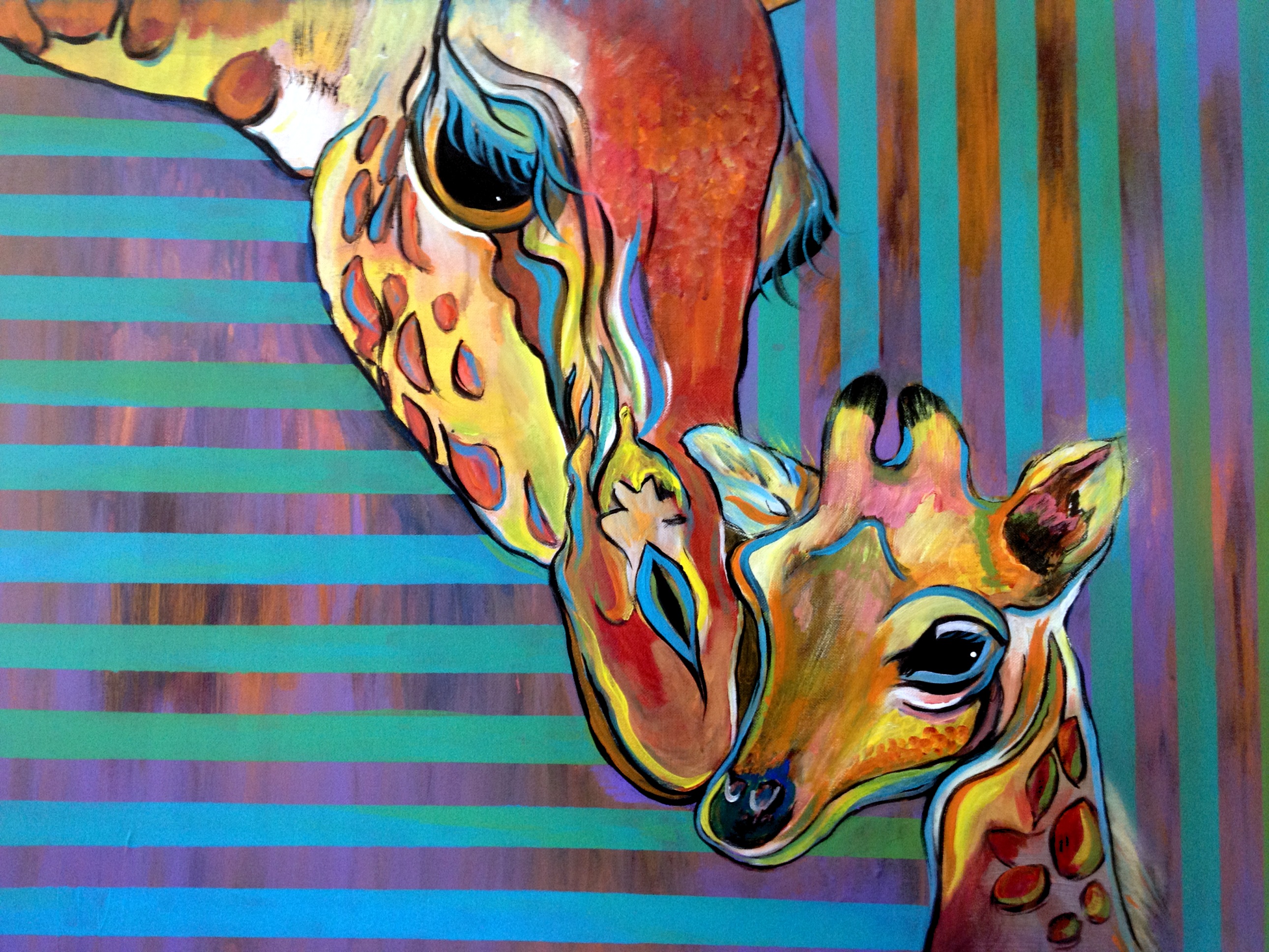 CSU Shiley Institute for Palliative Care Healing through the Arts!

I’ve always used art as a tool to help me connect, communicate and to cope with difficult times in my life and now that I know and understand the power of the arts, I share this knowledge with others.

You too can learn to use art to help you and then learn how to use art to help others. If you’re interested, sign-up for my next Healing through the Arts – Train the Trainer course hosted by the CSU Shiley Institute for Palliative Care.  We offer a simple 6-week online course and no art experience is necessary. Visual art projects are as simple as scribbling, doodling, collage making and working with mixed media but you’ll also learn more about yourself and how art helps others.

I finished this #acrylic on #watercolorpaper tonight. It has meaning to me but what does it mean to you? Just curious what comes to mind when you see it. 22”x30”

Too many Veteran suicides and Deana was one of them…

These were the words written by Laurel Martorella’s daughter.

These words were quoted in an article posted on NPR, Battling Depression And Suicide Among Female Veterans.

These were words that rattled my bones and made me sick to my stomach.

I was compelled to paint Deana’s portrait and share her mother’s story.

I know that suicide rates are high in our military culture, and over 20 every single day? It’s too much. It’s hard to understand. I don’t believe our Vets really want to die; I believe that they just want the pain to go away.

Deana Martorella was too young to leave her family and deserved so much more. I am doing what I can to help bring more awareness and educate others but more importantly, I want to help our Vets in pain and also their families.
So that I can process struggles in life, I paint, I create and I make art. Art helps me heal and helps me feel closer work through my thoughts.

Laurel Martorella is Deana’s mother and provided me permission to share her story. She and her family and friends have founded The Deana Martorella Memorial Scholarship Foundation and she also wants to fight the suicide crisis.

“…it is our desire to use Deana’s story to help spread awareness and in turn possibly lead others to seek help. Deana seems to have a way of reaching out to others to let them know she is with them…I hope you feel her love and support as well… I know she is grateful. Seeing the number 22 (her soccer #) and dragonflies are her ways to let us know she is near. Thank you for all you do.” Laurel Martorella

We don’t always know what is going on inside our child’s head. We like to think we are doing what is right for them. Apparently, I missed some signs along the way. For now, that is my truth.

Deana was my fourth child out of five wonderful children. She brought new and exciting things into our family. She was the “Italian” child with dark hair, strikingly beautiful dark brown eyes and had a darker complexion than her siblings. As a child, she was happy and bubbly and enjoyed and excelled at both her schoolwork and athletics. Outdoors brought her great joy and she spent many years as a girl scout, learning and appreciating all that being outdoors gives anyone who takes the time to enjoy Gods beauty.

Deana was a beautiful person inside and out but I can’t help feeling that she never really realized that. Not because people didn’t tell her or show her how they felt…I just don’t think she believed it herself. She touched so many peoples’ lives in so many different ways. From her love of learning, soccer, the Marine Corps, physical fitness training, always on the hunt
for a good bargain, or just everyday thoughtful things to brighten a person’s day.

She wasn’t an easy person to understand. She had her struggles. But when she found something she was passionate about, the sky was the limit.

Deana excelled in high school. She graduated 6th in her class but was somewhat a loner. She had very few close friends but those friends were very dear to her and remained in her life. She loved learning and reading. She always had a book close by. She played the trombone, held records in track and even played basketball. But the sport she loved the most was soccer. She played soccer for many teams…and loved every minute of being on the field.

She went to college a year and like a lot of people struggled to find her way. She went to live with her sister in Texas for a while before returning home to attend another year at college. Deana then decided to enlist in the United States Marine Corps. She said it was the best decision she ever made. She graduated from boot camp the top of her class and had the highest PT score for both the male and female warriors. Her MOS was in Intel and she was stationed at Camp Lejeune. She fell in love with North Carolina. She loved the Corps and was chosen to do a tour with a FET (Female Engagement Team) in Afghanistan. She didn’t tell me a lot about what went on over there but she said she saw the world differently after that. After a failed marriage she moved and rented a house. Someone set her house on fire and she lost everything. That experience left her terrified. She left the Marine Corps a Sgt. after completing 5 years of service. She wanted to become a Physical Fitness trainer and had enrolled in the University of North Carolina to pursue a degree in Kinesiology. During her exit from the military, she was diagnosed with PTSD. She never shared this information with me. How I wish she had.

She worked 2 jobs to support herself. She was a good person. Deana had some really super great friends who were always there for her. She also had some people who were not so supportive. Deana had some ups and downs and like many, she made some not so smart choices. She always owned up to everything and tried to move forward…even with her faults I always felt she was moving forward. We talked often and I always told her how special she was and how proud I was of her. I suppose she only told me bits and pieces about how she felt. Her being so far away made it difficult for me to truly understand. I’m not sure even she understood.

They tell me her PTSD was combat-related in combination with the house fire. She was speaking to a pastor and had accepted Jesus the Sunday before her death. The day she died she went to the VA and spoke to a counselor and I was told they also saw no evidence to be concerned about. No one did. All her friends and family that spoke to her felt she was focusing on making good decisions about her future. We were all wrong. That’s the thing about PTSD. You need help to sort things out and to learn coping skills. All it takes is some kind of trigger to cause the person to act irrationally. I was honored to visit with those who were active in her life in North Carolina. They gave me the insight into the wonderful person that she was to them and told me many kind ways in which she touched their lives.

It has taken me days to write this. Even typing the words, my daughter committed suicide, brings me to uncontrollable tears. I will never again see or hear from my sweet child. The heartache consumes me on a daily basis. I am a mother and a fighter and I have decided to honor such an amazing woman by helping to promote PTSD and suicide awareness. 22 Veterans commit suicide every day. A fact I did not know until I lost my daughter. It is my mission to help others be aware and seek help for themselves or those they love.

I so enjoy facilitating community art projects and fortunately have the opportunity to host another workshop this summer at the Interfaith Community Service with their Haven’s House homeless clients. Human Development students taught by Dr. Eliza Bigham at CSUSM is hosting this project with me.  I take the role of coaching, inspiring and guiding our students as they encourage homeless individuals to create art with them.  One individual told me today that he should do more art like this. He shared he’d served time in prison and spends a lot of time in courtrooms but is looking to create art as a way to unwind and deal with the stress.

We are only on day two of the project and will continue it next week but so far, the project is progressing nicely.

Participants shared that they like the bright positive colors and it makes them feel energized.  The conversations shared among the group is fascinating and I learn so much about others and what they endure in their lives.

Stay tuned as the project evolves… 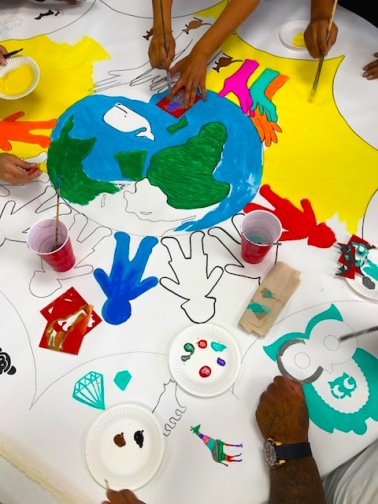 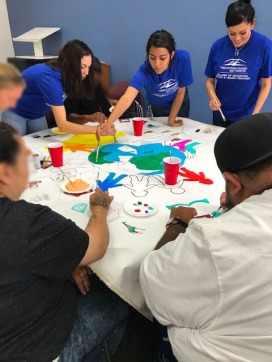 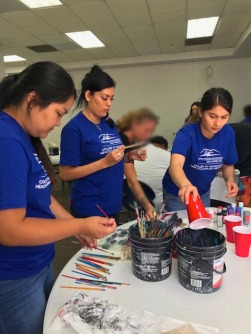 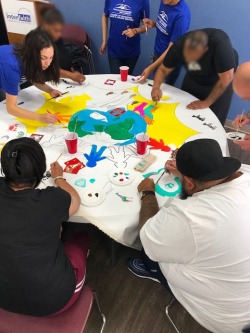 If you know me or follow my work, you know I work full-time during the days and then paint like there’s no tomorrow by night.  I always have several collections in the progress but one collection I’m currently working on is painting random female faces reminding that ALL women can be Wonder Women regardless of their color, size, weight, class, race, ethnicity, beliefs, or cultural background! 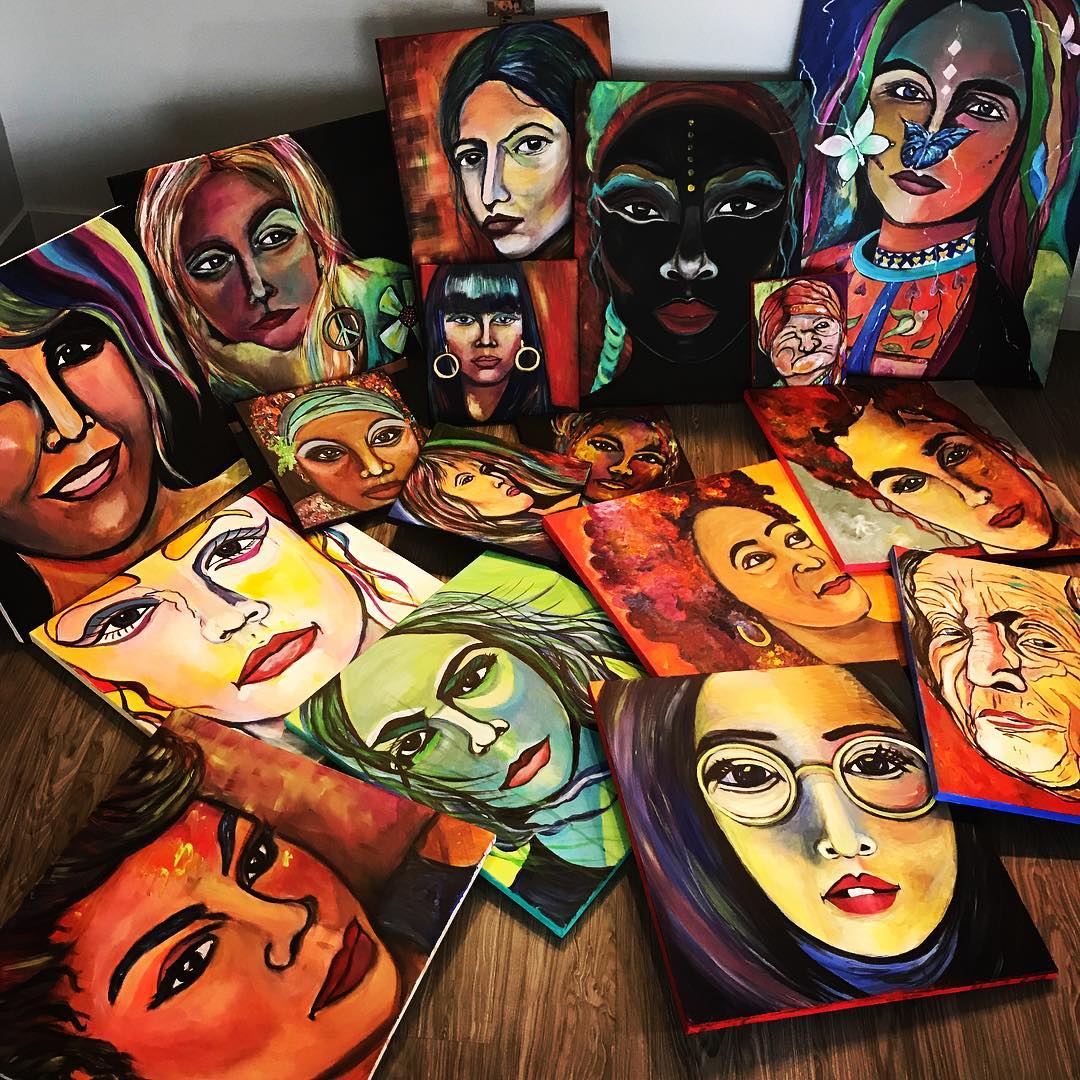 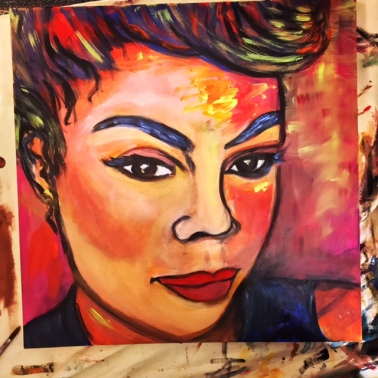 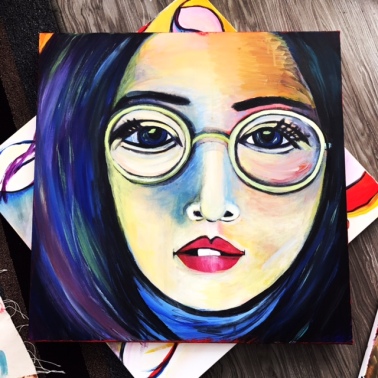 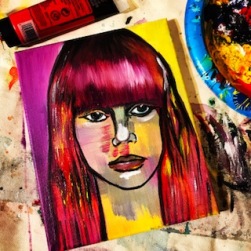 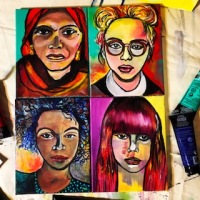 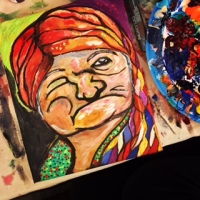 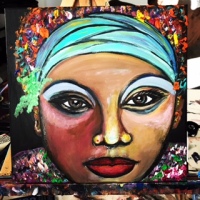 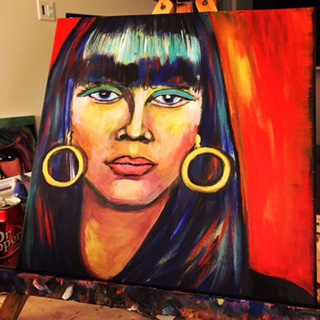